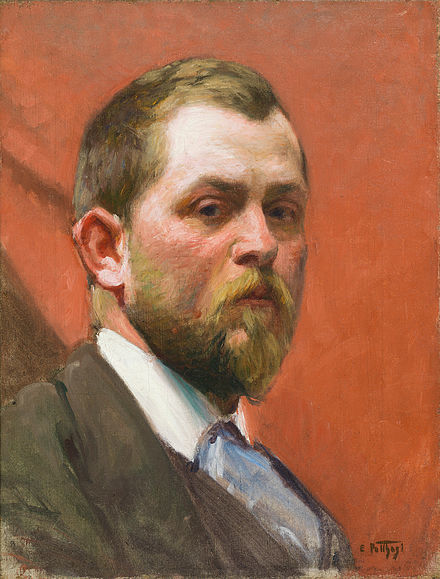 Edward Henry Potthast (1857-1927)American Impressionist Edward Henry Potthast is best known for sunny beach scenes, filled with sparkling surf and high-keyed details such as balloons, hats and umbrellas.  He was born to a family of artisans in Cincinnati, Ohio, on June 10, 1857.  At age twelve he became a charter student at Cincinnati's new McMicken School of Design.  He studied at McMicken, off and on, for over a decade later known as the Art Academy of Cincinnati.  From 1879 to 1881, his teacher was Thomas Satterwhite Noble.  Noble, a portrait and figure painter, employed a dark palette and a rich, painterly technique derived from his instruction under French artist Thomas Couture.Potthast made his first trip to Europe in 1881.  After a visit to Antwerp, where he studied with Polydore Beaufaux and Charles Verlat, Potthast proceeded to Munich perhaps on a visit that had been prearranged with Noble, who was also in Munich in the early 1880s.  Munich and its Royal Academy strongly had long been a destination for Cincinnati artists.  Potthast and Noble had been preceded by fellow Cincinnatians John Henry Twachtman, Robert Blum, Joseph De Camp, and Frank Duveneck, who alternately taught in Munich and Cincinnati.  At the Royal Academy, Potthast studied with the American-born instructor Carl Marr (von Marr, after 1909), who was known for his adroit handling of light and shadow in realistically rendered works.  Potthast completed his European tour with a visit to Paris, where he studied for about a month and a half at the Académie Julian.Returning to Cincinnati in 1885, Potthast resumed his studies with Noble, while earning his living as a lithographer.  At this time, his painting style was much influenced by the Munich School, which was, in turn, influenced by the Dutch painting tradition. Potthast's paintings, which included both interiors and landscapes, displayed sound draftsmanship and dark tones applied with solid unbroken strokes.  At the end of 1886, he again departed for Paris, where he studied with Fernand Cormon and, possibly, with Jules-Joseph Lefebvre.  In 1889 he met American Robert Vonnoh and Irishman Roderic O' Conor, landscape painters who were working at Grèz.  The cool-toned, Impressionist paintings with scumbled surfaces these painters and others at the Grèz colony were making had a profound impact on Potthast's palette.  His conversion to Impressionism was immediate and irrevocable.  When he returned to Cincinnati, he carried back light-filled canvases, paintings such as Sunshine, 1889 (Cincinnati Art Museum), a painting of a girl in an outdoor setting, which had been exhibited in the Paris Salon of 1889.  When the exhibition entitled "Light Pictures" opened in 1894 at the Cincinnati Art Museum, Potthast was the only American artist included in the show.Even though he enjoyed modest success in his hometown, Potthast made the decision to leave Cincinnati in 1895 and establish himself in New York City. While he went about setting up a painting studio, he fulfilled illustration commissions for the publications Scribner's, Century, and Harper's.  He exhibited watercolors and oil paintings in exhibitions at the Art Institute of Chicago beginning in 1896, and at the National Academy of Design from 1897.  He won the academy's Thomas B. Clarke prize for best figure painting in 1899, the same year was he was elected an associate of the academy.  Potthast was made a full academician in 1906.After his move to New York, Potthast made scenes of people enjoying leisurely holidays at the beach and rocky harbor views his specialty.  He spent summer months in any one of a number of seaside art colonies, including Gloucester, Rockport and Cape Cod in Massachusetts, and Ogunquit and Monhegan Island, Maine.  Such was his love of the beach that, when he resided in New York, he would journey out on fair days to Coney Island or Far Rockaway with his easel, paintbox, and a few panels.Potthast never married.  He was an extremely private person, though he was close to his nephew and namesake, Edward Henry Potthast II (1880-1941), who also was an artist.  Potthast died alone in his New York studio on March 9, 1927.The paintings of Edward Henry Potthast are represented in public collections across the United States, including the Museum of Fine Arts, Boston; Brooklyn Museum of Art, New York; Butler Institute of American Art, Youngstown, Ohio; Art Institute of Chicago; Cincinnati Art Museum; Georgia Museum of Art, Athens; Metropolitan Museum of Art, New York; and Pennsylvania Academy of the Fine Arts, Philadelphia.