Promise of a Sunset

Harry Reisiger was born in 1922. He painted during the height of the Modernist era in Cincinnati and studied under some of the city's most noted artists.  He attended the Art Academy of Cincinnati and later the University of Cincinnati. He eventually became a successful commercial designer.

During his time at the Academy, Reisiger developed a close working relationship with notable artist Paul Chidlaw. They shared a studio together for many years [2]. Chidlaw’s paintings made a lasting impression of Harry Reisiger’s style and final body of work. His paintings kept the influence of Chidlaw as well as were inspired by his love of music and landscape. “Reisiger’s work is inundated with the saturated colors of Matisse, the composition of Nicholas de Stael, and the touch of Willem de Kooning. Reisiger’s paintings evoke his many mentors, exuding a confidence and energy that, though occasionally crossing into the derivative, never veer into the clichéd” as quoted by art critic Alan Pacaro. Both artists remained close until Chidlaw's death in 1989.

Reisiger defined his work as post-Modernist with strong Expressionist influences.  His painting career began after he was discharged from the Navy after World War II, when he took advantage of the G.I. Bill and enrolled in evening art classes.  His first love was music, but he gave up his trumpet to paint while working full time in advertising and raising a young family. [1] 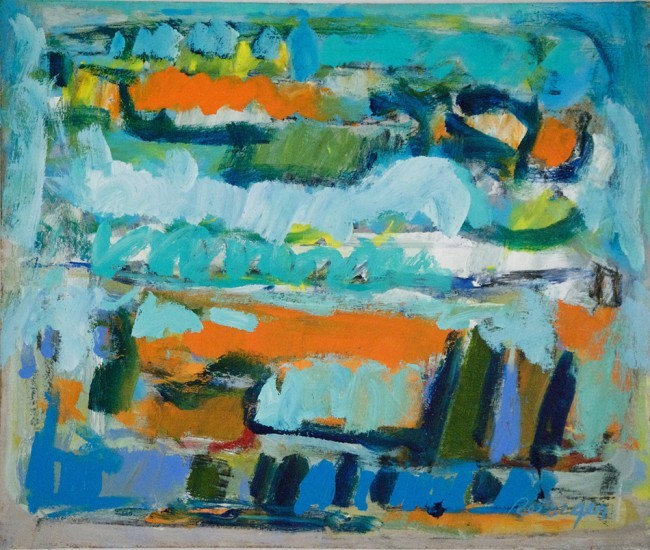 “Works such as the effervescent Seaside and the viscous From Above -both laden with impasto – provoke a careful examination of surface and their compositions reiterate the profound impact of Chidlaw’s style on the junior Reisiger.  The facture of these many easel-sized paintings emphasizes the horizontal, befitting the paintings’ terrestrial preoccupations and imparting a pleasing formal unity to the exhibition. Though these works are often loose and flowing, they eschew the accidental.  In ‘A Blustery Day’, -the high point of the exhibition- the artist employs audacious brushstrokes and forceful chromatic contrasts to depict a roiling sea of air.  Stopping just short of abandon, this work witnesses the student exceeding the master.” Alan D. Pacaro