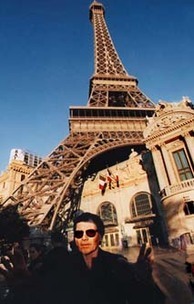 After starting his career at the age of 14 as a copy boy in the Washington bureau of the Associated Press news service, Julian Wasser went on to create some of the most memorable images of the past century. While at the Associated Press he met Weegee and rode with famous news photographer as he shot photos of crime scenes in Washington. Weegee was a major influence on Wasser's style of photography. After serving in the Navy in San Diego, the former AP copyboy became a contract photographer for Time magazine in Los Angeles doing assignments for Time, Life and Fortune. His photographs have appeared in and been used as cover of Time, Newsweek and People Magazines in the United States; and on cover assignments for The Sunday Telegraph and Sunday Times in London. His photos have also appeared in US Magazine, Vanity Fair, TV guide, Paris Match, Der Spiegel, Oggi, Hello, Playboy, Elle, Vogue, GQ along with exhibitions in galleries and museums.Wasser's most notorious photo session was of groundbreaking artist Marcel Duchamp playing chess with a naked Eve Babitz in 1963 at the Pasadena Museum of Art during Duchamp's first retrospective. Organized by Walter Hopps, then director of the museum (now the Norton Simon Museum), the exhibition was the first comprehensive survey of Duchamp's storied career, which began in 1911 at the legendary Armory show in New York. Duchamp, by this time, was the most influential artist in the world, having revolutionized the modern art world with his unconventional concepts. At the time, he had retired from being an artist to pursue his passion for chess.As the story goes...news photographer Julian Wasser was sent on assignment by TIME Magazine to cover, what anyone from the press would have classified as,"just another art event." At first, he was unaware of the relevance of the exhibition, but once Wasser arrived at the museum, he quickly assessed the importance of the event. Perhaps it was a question of importance of the event. Perhaps it was a question of fate - being at the right place at the right time - but the fact that the opening reception attracted renowned artists of that day would be the impetus that put Wasser on the map. Well known artists such as Ed Ruscha, Billy Al Bengston, Larry Bell, Dennis Hopper, and a young Andy Warhol all attended the opening reception. These cutting edge artists were Wasser's subjects. He captured the most authentic and compelling photos of revered artists of the 1960's, 1970' and 1980's.​Julian Wasser's photographs of Los Angeles life can be seen in his book THE WAY WE WERE published by D.A.P. Damiani.