Saratoga, Back Side Barn 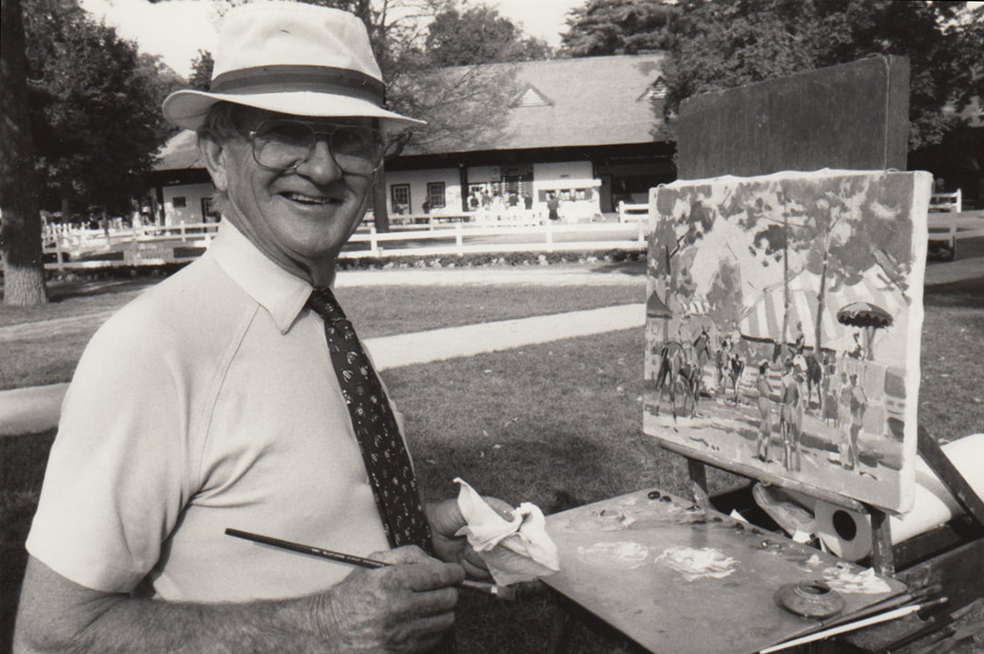 ​New Zealand-born artist Peter Williams, a beloved and familiar figure in the paddocks of the most famous racetracks in the world, died at the age of 84 at his home in Goshen, Kentucky on August 13, 2018 after battling the debilitating effects of Lyme disease in recent years.

By his own admission, with a few notable exceptions, aspiring artists in New Zealand in the early 1950s had two options, teach or starve.  So painting became a pastime for Peter Williams while he worked as a shepherd and continued to be an important part of his life when he had a small property of his own farming sheep and cattle. He was encouraged in his art, which, because of his talent, led to emerging recognition, winning awards and landing exhibits in New Zealand and Australia.

Because of this success, Qantas Airlines invited him to be a guest on their inaugural 747 flight to the United States in 1971. That opportunity led to a yearlong adventure traveling the U.S. with his wife and three young children in a small motor home, painting and exhibiting.

Ten years later he and his family repeated the trip and all three children attended art school and painted scenes from life alongside their artist father. A chance meeting with Richard Stone Reeves, who specialized in equine art, resulted in a commission to paint racing scenes. Peter spent more time in the United States, visiting racetracks and equine sporting venues while building a vast international network of friends and collectors. His collaboration with Reeves was mutually successful and lasted for five years.

Peter realized that seeing someone painting from life was a novelty and a fun distraction for many attending racing and sporting events. A unique combination of talent, his outgoing nature and self-deprecating sense of humor were irresistible. He was in demand stateside and Kentucky became a second home for him, largely because of the welcoming atmosphere at Keeneland and Churchill Downs.

Despite his abiding fondness for capturing the beauty, personalities and excitement of racing and equine sport, he went on to paint a wide variety of subjects.  Vintage automobiles, flower gardens, architecture, marine subjects, landscapes, figure studies and special events, always from life and almost always executed in oil, take shape quickly on his canvas.

His book, Peter Williams Retrospective: Paintings and People Dear to Me
​was published in 2012.